PURCHASE, N.Y., July 31, 2018 /PRNewswire/ -- The PepsiCo Foundation, the philanthropic arm of one of the world's leading food and beverage companies, and national nonprofit The Recycling Partnership today announced the launch of "All In On Recycling," the largest ever industry-wide residential recycling challenge to make recycling easier for 25 million families across the country – providing them with the resources they need to recycle more and recycle better.

The PepsiCo Foundation is providing $10 million in funding to jumpstart the historic challenge, which is one of the largest-ever public gifts of its kind. The goal of the challenge is to raise $25 million in total donations from leading businesses, companies, and organizations. In addition to contributions from other corporations, the more than 2,800 communities that participate in the initiative are expected to triple the collective investment, catalyzing roughly $75 million in municipal funding, and bringing the total amount of support to $100 million.

"I've always believed corporations do not operate in a vacuum – we have responsibilities to the communities we serve," said Indra Nooyi, Chairman and CEO of PepsiCo. "Our collaboration with The Recycling Partnership represents a major step toward fulfilling those responsibilities by helping reverse the decline in recycling rates for aluminum and many common plastics. I hope other corporations across our industry and beyond will join us and commit to being All In On Recycling."

The Recycling Partnership estimates the "All In On Recycling" challenge will help the U.S. capture 1.9 million tons of quality recyclable materials over the next five years, including 7 billion bottles and cans. This would result in a total greenhouse gas avoidance of 5.5 million tons of CO2 – the equivalent of removing more than 1 million cars off the road for a year.

"We are thrilled with the PepsiCo Foundation's generosity and leadership in creating a more sustainable future through recycling," said Keefe Harrison, CEO of The Recycling Partnership. "The PepsiCo Foundation's $10 million support not only allows us to make significant, measurable impact in communities, the environment, and people's lives all over the country, but also sends a powerful industry-wide message that we can only transform recycling if we work together. Companies know that while they can be fierce competitors on the shelf, once their products hit the recycling cart, we're all in this together."

Half of the total funds raised by this challenge are expected to help provide: 1) curbside carts to more than 550,000 households – a proven way to double the number of recyclables recovered; and 2) the missing infrastructure needed to recover recyclables from multi-family homes such as apartment buildings and condos, which is one of the most challenging segments of the population to serve. The other half of the funding will support critical recycling education and operational programs that will increase collection of recyclables while reducing contamination.

"We all must work to protect and reuse our world's limited natural resources," said Tim Carey, Senior Director of Sustainability at PepsiCo. "When it comes to U.S. recycling, PepsiCo has a long history of working with stakeholders and investing to improve recycling rates, and we've learned a lot. Our holistic approach includes making packaging more sustainable and investing in infrastructure to make recycling easier and more convenient – all to get recyclable materials back and support a circular economy. I encourage everyone who wants to make a difference to join the challenge so that, together, we lift U.S. recycling rates and close the loop."

The plan is to utilize some of the funds raised from the bold initiative to provide recycling solutions across the country to cities such as Miami, Florida, and El Paso, Texas, as well as the State of Michigan and the Central Ohio region – to name a few places.

"On behalf of Central Ohio's recycling programs, we are grateful that The Recycling Partnership and the PepsiCo Foundation have created the All In On Recycling challenge," said Ty Marsh, Executive Director, The Solid Waste Authority of Central Ohio. "Communities in Central Ohio still need funding for curbside recycling carts in order to provide the best possible access to recycling for our residents. We hope other major corporations join this challenge to reach $25 million in total funding so that thousands of cities and towns across the country can make improvements to their recycling systems."

This largest-ever major residential recycling initiative is part of PepsiCo's signature sustainability program, Performance with Purpose, which aims to deliver sustainable, long-term growth while leaving a positive imprint on society and the environment. By 2025, PepsiCo's goal is to design 100 percent of their packaging to be recyclable, compostable or, biodegradable; increase recycled materials in its plastic packaging; reduce packaging's carbon impact; and, in partnership with the PepsiCo Foundation, work to increase recycling rates. Already PepsiCo and the PepsiCo Foundation have invested approximately $55 million in recycling efforts in the U.S. in the last 9 years alone.

To join the "All In On Recycling" challenge and learn how you can help, go to allinonrecycling.com.

About PepsiCo
PepsiCo products are enjoyed by consumers more than one billion times a day in more than 200 countries and territories around the world. PepsiCo generated more than $63 billion in net revenue in 2017, driven by a complementary food and beverage portfolio that includes Frito-Lay, Gatorade, Pepsi-Cola, Quaker, and Tropicana. PepsiCo's product portfolio includes a wide range of enjoyable foods and beverages, including 22 brands that generate more than $1 billion each in estimated annual retail sales.

At the heart of PepsiCo is Performance with Purpose – our fundamental belief that the success of our company is inextricably linked to the sustainability of the world around us. We believe that continuously improving the products we sell, operating responsibly to protect our planet, and empowering people around the world enable PepsiCo to run a successful global company that creates long-term value for society and our shareholders. For more information, please visit www.pepsico.com.

About PepsiCo Foundation
Established in 1962, the PepsiCo Foundation works with non-profit partners to develop innovative, sustainable solutions that address challenges in underserved communities around the world. The Foundation, along with PepsiCo and its employees, seeks to catalyze efforts that advance our Performance with Purpose 2025 goals related to increasing access to nutritious servings, providing access to safe water, partnering to increase recycling rates, and enabling young women to progress through school and be successful in the workforce. For more information, please visit www.pepsico.com/Purpose/Global-Citizenship. 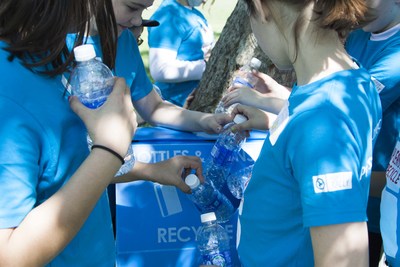