PURCHASE, N.Y., July 19, 2017 /PRNewswire/ -- What's totally rad and clear all over? The Crystal Pepsi Throwback Tour – a multi-city tribute to the nostalgia of the 90s. 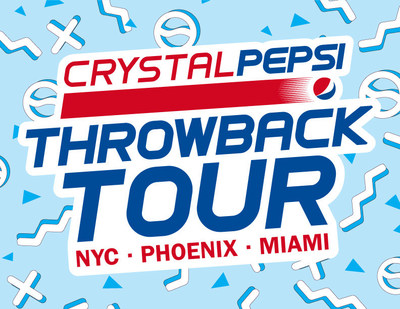 To honor one of the most iconic eras in baseball and music, the Crystal Pepsi Throwback Tour will present three free shows featuring a variety of 90s artists, centered around stadiums across the U.S. during the 2017 baseball season. In partnership with iHeartRadio's local FM stations, the tour will stop in New York, Phoenix and Miami. Each stop will give fans the chance to don their raddest wares, score some premium official Crystal Pepsi retro swag and celebrate the 90s "clear" hit, Crystal Pepsi.

All stops on the tour will lead up to the release of the beloved, iconic 90s clear cola – which will be available on shelves for one last limited time across retail locations in the U.S. mid-August.

The tour will kick off with a pre-game concert in New York outside Yankee Stadium at Billy's Sports Bar on Tuesday, Aug. 1, 2017, featuring 90s hip-hop icon, Busta Rhymes. The event will be hosted by iHeartRadio personality, "The Voice of New York," Angie Martinez.

Additional tour dates and locations include:

For a chance to win free tickets to a Crystal Pepsi Throwback Tour stop in your city, tune-in to WHTZ, WKTU, WWPR in New York, KESZ, KMXP, KYOT in Phoenix and WHYI, WMIA, WMIB in Miami starting July 19, and visit iheartradio.com for rules.

"Crystal Pepsi has always been a fan favorite and fans continue to ask for it time after time," said Chad Stubbs, Vice President, Marketing, Pepsi Trademark. "From the 90s through today Pepsi has been a brand very much connected to music and baseball. We're excited to see this special tour come to life and to celebrate Crystal Pepsi's last return."

Crystal Pepsi was offered for a limited time in the U.S. through a holiday sweepstakes, with a quick release in stores Summer 2016. Prior to this, Crystal Pepsi had not been available on store shelves in 23 years.

Beginning Aug. 14, 20-ounce bottles of Crystal Pepsi will be available for purchase at major retailers for a suggested retail price of $1.79. Visit www.pepsi.com for more information on Crystal Pepsi, and join the conversation via @pepsi and #CrystalPepsi.

About PepsiCo
PepsiCo (NYSE: PEP) products are enjoyed by consumers one billion times a day in more than 200 countries and territories around the world. PepsiCo generated approximately $63 billion in net revenue in 2016, driven by a complementary food and beverage portfolio that includes Frito-Lay, Gatorade, Pepsi-Cola, Quaker and Tropicana. PepsiCo's product portfolio includes a wide range of enjoyable foods and beverages, including 22 brands that generate more than $1 billion each in estimated annual retail sales