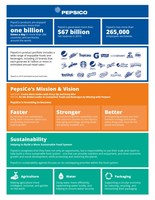 "We are thrilled to welcome Roberto, who brings valuable political skills and technical knowledge of the complex social, political, and regulatory environments impacting multinational corporations like PepsiCo," said PepsiCo Chairman and CEO, Ramon Laguarta. "Over the course of his career, Roberto has built an extensive, diverse network across the globe and is widely recognized by world players in both developed and developing economies. His geopolitical insights will be invaluable to our discussions and decision-making in an ever-changing world, and we are proud to have him lead our engagement with key global stakeholders."

Azevêdo currently serves as the sixth Director-General of the WTO, a position he has held since September 2013. In 2008, he was appointed Brazil's Ambassador to the WTO. From 2006 to 2008, Azevêdo was Vice-Minister for Economic and Technological Affairs at the Foreign Ministry in Brasilia, where he was Brazil's chief trade negotiator for the Doha Round and represented Brazil in MERCOSUR negotiations. From 2001 to 2005, he was head of the Brazilian Foreign Ministry's Dispute Settlement Unit and Brazil's chief litigator in WTO disputes. Azevêdo, who is also an electrical engineer, began his career as a diplomat in Washington, DC, followed by additional posts in Montevideo, Uruguay, and Geneva, Switzerland.

"I am delighted to join PepsiCo at time when strengthening relationships between business, government and society has become essential to generating sustainable and inclusive long-term growth," said Azevêdo. "PepsiCo is a global leader in driving meaningful collaborations and investments focused on the betterment of our society and planet. Together with the leadership team, I look forward to helping PepsiCo continue to create positive and impactful change as we integrate and advance our global business strategy."

Chief Sustainability Officer and Executive Vice President, Beyond the Bottle

PepsiCo also announced today that it has appointed Jim Andrew as Chief Sustainability Officer, in addition to his current role as Executive Vice President, Beyond the Bottle, effective September 1, 2020. Andrew replaces Simon Lowden who has decided to retire from PepsiCo after 24 years of exemplary service.

"I want to express my deep gratitude to Simon for all he has done to advance PepsiCo's mission and vision throughout his career, and for standing up our Sustainability Office for the next decade of progress," said Laguarta. "I wish him all the best on whatever journey he chooses next and look forward to his continued success."

Laguarta continued: "Jim's experience running our Beyond the Bottle initiatives and our SodaStream business – both of which operate at the nexus of our commercial and sustainability agendas – make him the ideal leader for our sustainability efforts going forward. With him at the helm, we will continue to raise our ambitions to become planet positive, taking bold steps to catalyze positive change and build a stronger, more sustainable future for us all."

PepsiCo products are enjoyed by consumers more than one billion times a day in more than 200 countries and territories around the world. PepsiCo generated more than $67 billion in net revenue in 2019, driven by a complementary food and beverage portfolio that includes Frito-Lay, Gatorade, Pepsi-Cola, Quaker and Tropicana. PepsiCo's product portfolio includes a wide range of enjoyable foods and beverages, including 23 brands that generate more than $1 billion each in estimated annual retail sales.

Guiding PepsiCo is our vision to Be the Global Leader in Convenient Foods and Beverages by Winning with Purpose. "Winning with Purpose" reflects our ambition to win sustainably in the marketplace and embed purpose into all aspects of the business.  For more information, visit www.pepsico.com.