SEATTLE, Oct. 6, 2021 /PRNewswire/ -- Today, PepsiCo announced its sixth annual "Rolling Remembrance" relay to help raise awareness of and funds for Children of Fallen Patriots Foundation, an organization that provides college scholarships and educational counseling to children who have lost a parent in the line of duty.

To honor the military heroes who lost their lives while serving the United States, 36 PepsiCo drivers – who happen to be military veterans themselves – will participate in a cross-country relay, transporting an American flag first flown on a UH-60M Blackhawk Helicopter in Afghanistan during Operation Enduring Freedom between 51 nationwide stops along normal business routes.

As a like-minded partner, JetBlue, in partnership with its Vets in Blue crewmember resource group, kicked-off this year's relay on Oct. 3 with a crew consisting of veterans, flying the American flag from New York's John F. Kennedy International Airport (JFK) to its first stop in Seattle aboard its Vets in Blue plane. The flag is now travelling the remainder of its 8,687-mile journey throughout the United States on the ground and will conclude at PepsiCo headquarters in Purchase, N.Y. on Veterans Day (Thursday, November 11). The annual event is led in partnership with PepsiCo's employee resource group, PepsiCo Valor, which supports veteran PepsiCo employees and veterans in communities across the country. This year's veteran drivers include:

"After conducting Rolling Remembrance virtually last year, we're so proud to have it back on the ground for our sixth year," said Jim Farrell, Senior Vice President of Operations, PepsiCo Beverages North America Central Division and Executives Sponsor of PepsiCo Valor. "Honoring the sacrifices of these military heroes, supporting their families with Children of Fallen Patriots Foundation, and recognizing our own military veterans at PepsiCo is a special occasion for us every year."

Approximately 25,000 children have lost a parent in military service over the last 35 years. Through scholarships and educational counseling, Children of Fallen Patriots Foundation helps to bridge the average $25,000 gap between government assistance programs and the cost of a four-year degree that scholars face. To donate to Children of Fallen Patriots foundation, visit www.fallenpatriots.org

"We're grateful for PepsiCo's partnership and for standing with us in this commitment since 2015," said David Kim, co-founder and CEO of Children of Fallen Patriots Foundation. "Investing in the education of military children who lost a parent in the line of duty is one of the best ways we can honor those who lost their lives defending our country."

Since 2015, the PepsiCo Rolling Remembrance relay has raised $1.2 million in donations for Children of Fallen Patriots Foundation.

About Children of Fallen Patriots Foundation
Fallen Patriots honors the sacrifices of our fallen military heroes by ensuring the success of their children through college education.  Since 2002, Fallen Patriots has provided over $49 million in total assistance, including college scholarships and educational counseling to over 2,100 military children who have lost a parent in the line of duty.  Nearly 25,000 children from across America will need future assistance.

About PepsiCo
PepsiCo products are enjoyed by consumers more than one billion times a day in more than 200 countries and territories around the world. PepsiCo generated more than $70 billion in net revenue in 2020, driven by a complementary food and beverage portfolio that includes Frito-Lay, Gatorade, Pepsi-Cola, Quaker, Tropicana and SodaStream. PepsiCo's product portfolio includes a wide range of enjoyable foods and beverages, including 23 brands that generate more than $1 billion each in estimated annual retail sales. Guiding PepsiCo is our vision to Be the Global Leader in Convenient Foods and Beverages by Winning with Purpose. "Winning with Purpose" reflects our ambition to win sustainably in the marketplace and embed purpose into all aspects of our business strategy and brands. For more information, visit www.pepsico.com. 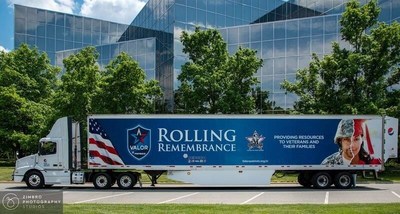